Ashtakavarga system deals with transit or Gochara of Grahas (Planets) in Bhavas (Houses). It has less significance in natal chart interpretation for Mundane Predictions and timing of events.

** Each Kaksha is ruled by a Graha.

** The sequence of Kakshas are Shani (Saturn), Guru (Jupiter), Kuja (Mars), Surya (Sun), Shukra (Venus), Budha (Mercury), Chandra (Moon) and Lagna. The sequence is mathematically based on the decreasing order of the time taken by the grahas, to transit a sign.

** Rahu and Ketu move in retrograde motion and not taken for positive Mundane Predictions in Ashtakavarga.

** Each house of a Graha and Houses gets benefitted or strength. 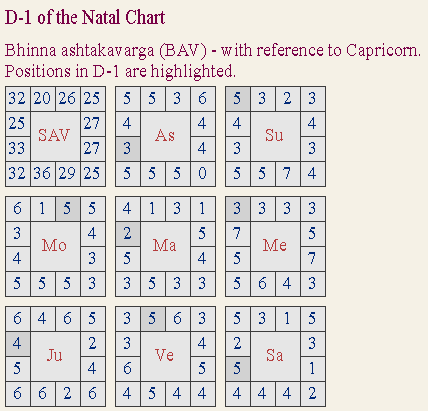 Use a good Astrological software to make your Sarva Ashtakavarga for your birth chart.

Mark the natal chart, starting from Lagna as 1 till the 12th house for Sarva and graha Ashtakavarga charts.

In the Sarva Ashtakavarga, note down the houses which has maximum and minimum bindus. Also in the graha Ashtakavarga charts.

The lowest bindu house indicates problems in the natal chart.

I have 33 in 1st house. A self made person with a strong mind.

It is a quick way to assess a chart.

Gochara can be read, with the bindus of the house, graha transiting it.

It cannot tell the event that will happen.

It cannot tell the time of the event based on the chart, namely using Vimshottari Dasha or any other.