What is the astrological significance of the CoronaVirus (COVID-19)?

Read this Q2A and its comments for more details…

Steve Hora s answer to What are some predictions for the future of China?

In mundane astrology, when dealing with countries, it is very important to see, the 1st lord, its children (People) and 6th house of Diseases. 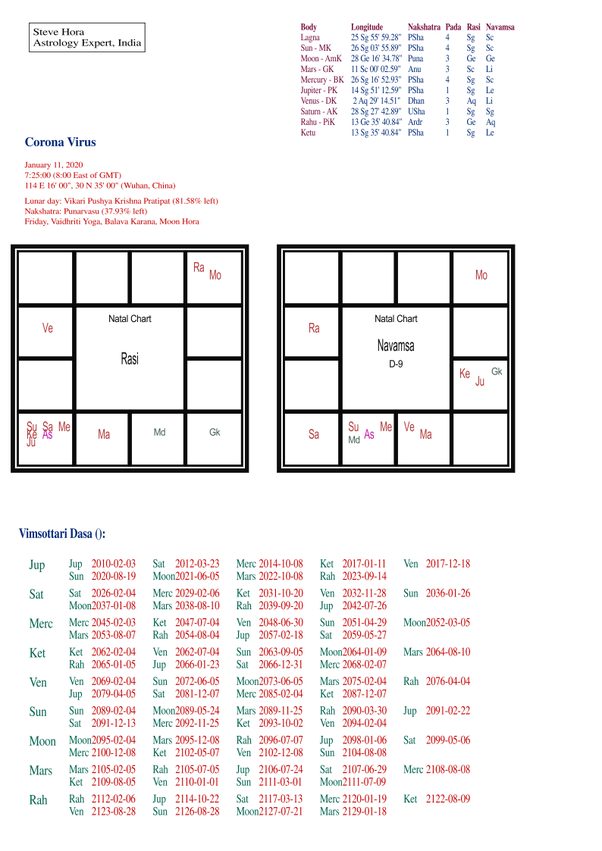 Guru (Jupiter) the ascendant or lagna lord is in his own house, but eclipsed by Ketu-Rahu axis. Ketu does NOT like Guru.

Saturn, Mercury and Sun are also caught in the Rahu-Ketu (North-South Node) axis.

Rahu had become powerful in Gemini, and its dispositor Budha (Mercury) is in lagna, opposing Guru.

Killer Mars is in 1/12 position with lagna lord Guru and Saturn, looking badly at 6th house of disease, and Mars with its bad-4th eye looks badly at Venus in 3rd. So the part of the body affected is 3rd house, which is Nose, Lungs and Respiratory system.

This brought the first sad news of death by way of a new virus, for great change in the world.

Saturn representing the masses is also in the R-K axis, and about to enter its own house Capricorn, causing great changes to the world structure.

Saturn sheds old ways and structures when in Sagittarius and brings great changes in Capricorn, to start a new order in world. Guru assists by being with Saturn in Sagittarius.

Saturn and Jupiter should transit to Capricorn and Mars also. Then Mars will be locked and jailed by Saturn in its house, thereby bring a solution to this menace of mankind. After April 1st there will be relief.

Till Mars transits out of Capricorn, all precautions can be taken.

When in Aquarius, Mars will again try to harm Saturn (People of the world), but solution will be in place and will be controlled.